When I arrived there the tide was luckily at its low point exposing a large area of rock pools surrounding the Bridge. It was a photographers heaven. There were lots of pools surrounded by large expanses of rocky plateau over which the gentle waves would occasionally flow.

My original intention was to photograph the Bridge but I found the rocky shallows surrounding the bridge to be much more interesting. Since the sun was setting and it was getting dark it gave me the opportunity to try doing some long exposures, ….something that I haven’t tried before.

When moving water is photographed using a long exposure time the resulting image makes the water appear more like a fog or mist. The “misty” water running between some sharply focussed rocks looks wonderful (to me anyway). 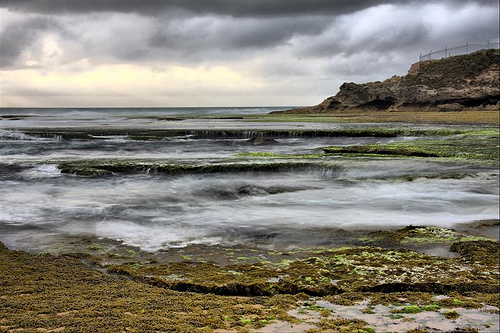 From a technical perspective here are some camera settings details –

I had a polarizing filter on the front of the lens to reduce the amount of sky reflected off the water pools that were close to the camera. I set the camera to aperture priority (Av) and a set the aperture value to F11 to give a wide depth of field which means that objects in both the foreground and background would be in focus. Setting the aperture to F11 also gives the added benefit of forcing the camera to keep the shutter open for a longer time, which is an advantage in this case because I was trying to achieve a long exposure to “blur” the moving water.

I also changed the cameras ISO setting from the default of “auto” to “ISO 100” which makes the sensor effectively less light sensitive and forces the camera to keep the shutter open for longer as it tries to achieve a “correct” exposure. 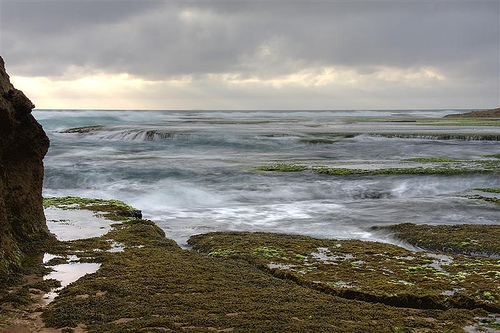 As much as I hate using a tripod I certainly used one for this expedition. After fiddling around with the camera settings the average exposure for most shots was about 5 seconds, way too long for holding by hand.

I also used exposure bracketing for each shot so that I would have the flexibility to generate some HDR (high dynamic range) photos if required. This meant that the shutter was sometimes open for about 10 seconds or more. 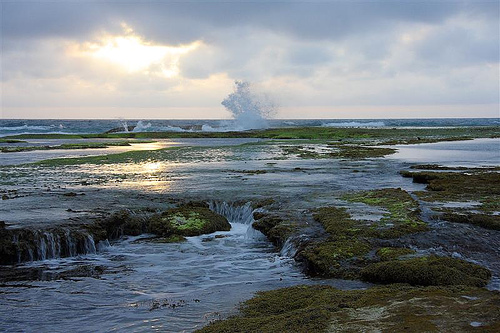